Before concrete roads and steam-powered ferries, a green belt lined the Bosphorus,  and studded with quaint and colorful villages like Kuzguncuk, it was the rule of coastline life and not the exception. Since the mid-nineteenth century, linkage between the Bosphorus villages and their local megalopolis brought bustle, opportunity, and accessibility, but it also joined their fate to the sprawling mass before them. Many Bosphorus villages underwent major facelifts; transformations and “renewals” brought to their logical extreme through the sort of development schemes that entail wholesale demolition. The regrettable truth is that in present-day Istanbul, these historic villages face a real threat; some vanish completely.

Kuzguncuk is an ancient site along the Asian shores of the Bosphorus. It is shaped by natural borders: the green grove of the Fethi Pasha Woods to the west, and the medieval Nakkaş Baba cemetery to the east. Nowadays it is valued for its two rare features: mahalle culture (the traditional intimate village life and social dynamics of old world Istanbul) and its bostan, or urban garden, a part of an ancient, vast, and highly self-sufficient urban agricultural system.

Today Kuzguncuk’s bostan forms a sizable proportion of its total area, and doubles as a park, meeting space, and communal hub for the village. Amazingly, while many bostans across the city continue to vanish, Kuzguncuk’s garden thrives.

I first visited Kuzguncuk’s bostan with a group of friends one winter morning under a deluge of cold rain. Our timing was poor to say the least, and we’d missed the bulk of the harvest by a month; at that point there were few signs of life in the garden besides the perennial black cabbage. That’s a sharp contrast to the warmer months, when the garden grows more than two-dozen crops including: chili peppers, tomatoes, corn, okra, aubergines, spinach, peas, carrots, and more. We expected the winter garden to be dreary, but the morning of our visit, we were greeted by a troop of school kids who turned a series of large puddles into a splash-park.

The bostan shares a practical and symbolic role in the life of a neighbourhood that battles to maintain its distinction and authenticity. These qualities have long been an attraction to newcomers, notably in the ‘80s and ‘90s, when a generation of artists, architects, and academics moved to the village. Today they share deep-rooted connections to the garden and form the bulwark of  its bostan’s defense against redevelopment. “When I was studying architecture 20 years ago,”,says Tülay, a local activist, “I shared a house with some friends across from the bostan. When we came back from school in the evening we would go and pick our tomatoes and aubergines ourselves…”

When Kuzguncuk’s bostan sprang to life several centuries ago, it was one of several hundred urban gardens across the city.  Medieval Istanbul made masterful use of its urban greenery through a manipulation of space and a keen understanding of the seasons. Its gardeners organized themselves into guilds, and a whole series of producers and suppliers existed to support the bostans—basket weavers, seed suppliers, and so on.  For 700 years the city’s bostans had the incredible wherewithal to support half a million inhabitants with fresh vegetables. Neighbourhoods had specialty crops, like the fragrant strawberries of Arnavutköy, and the small, aromatic cucumbers of Cengelköy. Yedikule’s bostan, the city’s most ancient garden, which still hug the Theodosian Walls, used to produce a soft, almost buttery lettuce.

These are the networks and relationships that lasted into the middle of the twentieth century.  New regulations—such as a bill that forbade grazing of livestock— compounded stiff competition from vegetable producers in the Black Sea. These conditions made it extremely difficult to reach a living wage as a gardener.  As a result, many if not most bostan owners have opted to sell their land over the last half-century, meaning that most of the city’s bostans have disappeared in the last half-century as owners prefer to sell their land. Many bostans have met particularly ignominious ends, like Arnavutköy, which disappeared under a car wash.

Locals call the Kuzguncuk bostan, “Ilya’s orchard,” citing the now-deceased but much-beloved Greek gardener, the last of an unbroken line to tend the garden’s fields.  Greek communities have lived in Kuzguncuk for more than a thousand years: the village’s earliest structure, a Greek Orthodox Church, dates from the 800s. In the 1400s Greeks welcomed the settling of Sephardic Jews, and later Armenians in the 1700s. It wasn’t until the 1950s that a significant Muslim population, including many Turkish migrants from the Black Sea, moved to the village; before then, the few Turks who lived in Kuzguncuk were the Ottoman elite who built their magnificent wooden yalı along its shores. Nowadays the architecture reflects the neighborhood’s intimate and unassuming nature; an Armenian church and Turkish mosque stand close enough as to be practically conjoined, and historic residential areas feature wooden homes limited to just a few stories high, a stark contrast to the city’s concrete districts.

Ilya was the last gardener of his family, but not their last descendant; ownership of the land slipped out of the family amidst rather dubious controversy. In 1964 the Turkish government revoked the right of its Greek populace to permanent residency and local authorities began to exploit this measure as a lucrative source of income generation by seizing properties on the grounds of abandonment. “Ilya’s orchard” was one such property apparently “abandoned” by his family after his death— and sold to a private bidder.

The land was re-sold a few years later, this time to the local Üsküdar municipality, who planned to use most of the bostan’s land for a large primary school. Tülay Atabey and other local architects proposed to the municipality an alternative development plan for the bostan: they focused on repurposing it with a “right to use” rather than a “right to property”, and demonstrated how the bostan could host public events—festivals, outdoor movie screenings, and markets—involve both adults and kids, and, through the use of raised growing beds, even offer access to gardeners with disabilities as well.

The local community mobilized to show support for the alternative bostan project across media channels and through festivals, workshops, and widespread demonstrations. Across the city, the bostan became a symbol for the larger battle against expansive urban renewals. Tan Morgül, another prominent member of this collective, ushered its rallying cry: “the Kuzguncuk Bostan is Kuzguncuk’s memory, its breath, its colour! Let’s not allow anyone to touch our history, our breath or our green!” The locals boast that the campaign was the most significant protest until Gezi Park in 2013.

Üsküdar’s primary school plans were ultimately shelved, to great relief, in favor of the alternative bostan project. Now, since 2010, locals have been able to develop the land in ways that suit the community; also leading to a sharp rise in activity. There is now so much demand for the garden’s 100 allotments that they must be decided by annual lottery.

While my friends and I only saw the bostan in the winter, it was clear how it actively works for the community throughout the year: in the spring and summer evenings it hosts outdoor movie screenings and theater performances, and experts travel from different universities across Turkey to lead workshops. During the festive nights of Ramadan, locals break their fast together outdoors. In autumn, the neighbourhood communes to celebrate the harvest, teaching local kids about a range of produce. On the weekends, the streets spill out into a market bazaar. From the windows and balconies of nearby houses, the people of Kuzguncuk can hear nightingales sing into the early hours of morning.

After leaving the bostan, we were toured down Kuzguncuk’s main street by locals Tülay Atabey, Boğaçhan Dündaralp, and Aylin Örnek. We were taken to a local café, Kuzguncuk Pita, owned by Aylin. Tea was quick to emerge, along with plates of different sweet and savory pastries from the home-style kitchen. A full range of soft sheep’s milk cheeses were stacked behind tall glass counters at the corner of the kitchen. Through the café’s wide windows it was hard to ignore how the hanging greens of the ambling trees, the settled and slow pace of passerby, coffee-drinkers, and cats alike lent this area a peace worlds’ apart from the speed and relative chaos of some of the city’s other neighbourhoods. This, I thought, was the beauty of Kuzguncuk, this unexpected bastion of village life. 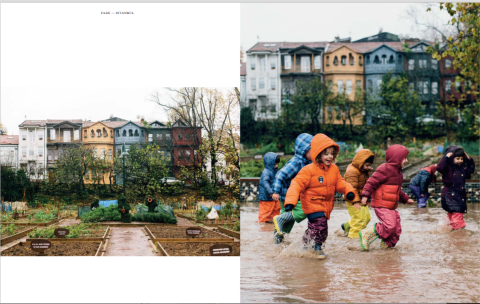